The United Indonesian Jewish Community - Brit Beracha Congregation Indonesia  has been supervising and mentoring the below second students/convert candidates since June 2014 - July 2016 :

After final study and interview process with UIJC rabbi, not all members could finish the studies and fulfill our requirements. Therefore, we let the ready students to meet our rabbis.

Rabbis arrived Yogyakarta on 12 July 2016 from Bali, and did interviewed Magelang Group in Yogyakarta  on 13-14 July. Mikveh was done at the spring of Water Department in Magelang.

After conducting shabbat with BBI Jakarta on 15-16 July 2016, Beth Dinh did interview for convert candidates on 17 July 2016 at the Peak (Frasseur)  Apartment, and Mikveh (immersion) done at Ancol beach Jakarta. Beth Dinh took flight to Timika Papua, via Makassar on 18 July.

Group of Jayapura joint Timika group for the interview.
Timika group had interview on 19-20 July 2016
Sentani Jayapura group had it on 22-23 July 2016
Our kehila BBI Mahanaim SP3 Timika Papua has built 2 beautiful Mikveh Pools in their big shul where they collected the rainfall water.

Below the students ready to meet Beth Dinh for interview, but 16 students had to delay their final process :

on 28/7, we departed to Menado, had our Maariv Service, Teaching and Dinner at Brit Beracha Beit Yisrael Menado
on 29/7, we had "bubur menado" breakfast, then visited Menorah. In Evening we again had Maariv Service, teaching and dinner
on 30/7, returned to Jakarta
on 31/7, in morning, I took rabbis to visit ex Dutch-VOC old city in North Jakarta and spent good time for shopping at Mangga Dua China Town market. In the afternoon, the rabbis interviewed the members of Brit Beracha Magelang, Jakarta and Papua, and we spent shabbat with Brit Beracha Jakarta
on 01/8, we had Shabbat Shakarit Service, D'var Torah dan Teaching. Rabbis used the occasion to talk with the leaders and members of Brit Beracha Jakarta. We had beautiful Havdallah service and dinner. And Rabbi Shoshana at last had to leave Jakarta to USA becuase her mother was in critical condition
on 02/8, Rabbi Kunin and I flew to Ambon and had dinner in our hotel. Foods provided by members of Brit Beracha Amboina
on 03/8, we tookRabbi Kunin to visit Ambon Beach and had walk. We visited ex dutch Amsterdam Fort, visited eels tourist area and Museum., In the evening we had a nice Maariv, dinner and teaching
on 04/8, we took rabbis to visit ex conflict area to see people and syuhada cemetry. We visited our old member who was sick, visited a portugese chatolic church next to Fransiscus Xaverius office, and interviewed a Jewish descendant from Kisar. In the afternoon Rabbi Kunin met 2 Christian Pastors who run Bnei Anusim - Beit Touroni who were helped by UIJC/BBI to study Torah. In the evening, we had Maariv and teaching with the community
05/08, Rabbi Kunin and I left Ambon to Jakarta, and Rabbi Kunin continued to the next flight to Japan

We have met the Vice President of WUPJ Rabbi Joel Oseran, and Boards of UPJ as well

In short time, the rabbis from Moetzah of UPJ will supervise physically our 268 members in 6 kehilots. They will teach and guide BBI/UIJC for the necessary works including the conversion programs of newly joint members.

We have already renewed our group membership to decide which ones are under our supervision for the above mentioned process. The names of kehilot affilated and supervised by us will be announced separately

UPJ at last sent his Moetzah Rabbis : Rabbi Shoshana Kaminsky from Beit Shalom Adelaide and Rabbi David Aaron Kunin from Japan Jewish Community. They did visit and supervise Kehilot in Jakarta, Menado and Ambon, and interviewed other members from Timika Papua, Lampung, Bali, Magelang, Medan and Balikpapan. The visits started from 27 July to -05 August 2015

The United Indonesian Jewish Community (UIJC) was established to respond to the outcry of the descendants of Jews in Indonesia who longed to know the G-d of their forefathers. The community leadership's policy was to accept all and every descendant, whether it be of matrilineal or patrilineal descent, and despite of their current religious practices.

In its development, many of these descendants showed tremendous dedication and thirst to know the truth and to seriously return to the faith of their ancestors. These people were gathered in smaller groups of communities called Kehilla, and exist in Lampung, Jakarta, North Sulawesi (Manado) and Maluku - and recently, a community of  Magelang - Central Java and SP3, Timika Papua emerged with the same longing. (For a list of these communities click here.) The yearning was so strong that many Jewish people from all over the world was drawn to it.

In the effort of studying about the Torah and Judaism in the midst of severe lack of resources, a helping hand individual rabbis provided answers when no one else was available and even facilitated the community in connecting with another Rabbi in the region, which will happen much later.

Cantor Evan Cohen of Kehilat Har-El in Jerusalem was the first who was moved by this strange wave of Indonesians celebrating Shabbat and praying to the G-d of Israel. With the facilitation of one of UJIC's former elder member Mrs. Marlina van der Stoop, he came to Indonesia for a visit in November 2012, to the community in Jakarta as well as in Manado. He stayed long enough to lead a few Shabbat services and teach about the holiday of Hannukah. During his stay here, he also visited the historical old city of Batavia, which was founded by a Dutch Jew, Jan Pieterszoon Coen, the Governor General of the Dutch East Indie Company in Indonesia.

The visit of Cantor Evan Cohen, who lead the Shabbat service with beautiful melodies, inspired one of the community members in Jakarta to learn about Jewish liturgical chanting on her own, solely depending on resources on the internet. This will later surprise the mentoring and converting Rabbis as they enjoyed the Shabbat Sacharit service in Jakarta. The non orthodox - liberal Jews called Brit Beracha community was founded in November 2012.

It was also thanks to Mrs. Marlina van der Stoop and Cantor Evan Cohen's facilitation that the Jewish community in Indonesia are currently in process of affiliating itself with the World Union for Progressive Judaism. For this purpose, the leadership of UIJC has participated in the UPJ mini convention in Hong Kong in May 2013 as well as the WUPJ convention in Jerusalem in the same month.

In April 2013, with the facilitation of Christians for Israel Indonesia, UIJC, represented by Jakarta's leader and member, was introduced to Rabbi Ari Abramowitz and Shaul Ravid who were then with Keren Hayesod. This was further progress in trying to connect with the rest of the Jewish community of the world and obtain some form of acknowledgement of its existence.

Rabbi Jonathan Ginsburg and Rabbi Steven Jules Peskind were two of the first ones to respond to the community's desire to convert. Many other rabbis of different affiliations have rejected the same request for various reasons. Rabbi Ginsburg mentored the community and supplied various books and resources on Judaism, feeding the community's hunger. After many months of mentorship and studies, in January 2014, he and Rabbi Peskind flew across oceans to meet with the community and guide them in their last steps of official conversion. For their love for these souls, they dared to venture into the unknown, setting foot in what they only knew as a country with the largest Muslim population in the world.

During the course of the conversion study, a member of the community made contact with Orthodox Rabbi Zev Schwarcz of the International Kosher Council who was fascinated to learn about a Jewish community in Indonesia. Although contact was made since before the conversion, it was only after the conversion that he had the opportunity to visit the community during one of his regular visits to Indonesia to assist a few Indonesian businesses in kosher certification. Since then, Rabbi Schwarcz has been in close communication with the community, and shares teachings to the community via Skype conference.

The Jewish community of UIJC has taken up more and more responsibility to join wider Jewish Communities, besides its main duty as ohr l'goyim, spreading the truth of Torah to the Jewish descendants and leading them back to the G-d of their ancestors, and working towards the unity of the Jewish people. In November 2014, the leaders of UIJC will once again join a conference to be held by WUPJ, strengthening the bond and friendship, paving the way for future collaboration, contributing to the restoration of the world. The leadership of UIJC continues to cater to the community's needs - guidance in celebrating Yom Tov, facilitation in obtaining Judaica as well as assistance in various family issues such as brit milah.

There have been some efforts to expand the members of UIJC and Brit Beracha, however, the leadership decided to focus on the outreach program to Jewish descendants and allocating the interest of Christian members to "study" Torah to other Torah study groups for nations
To lead 6 kehilot, the leader of UIJC trained 4 laymen or spiritual leaders with Para Rabbi Certification, so that they know how to lead services and do life-cycle ceremonies for their members. Benjamin Meijer was at last ordained as a modern rabbi from Rabbi (Modern Chasidic) Joseph H. Gelberman Rabbinical Seminary International New York, at Actors Temple, 47 Street, West Side Manhattan New York on 02 July 2015.
UPJ rabbis help UIJC to affiliate, and they provide sufficient help and trains for our local community  leadership

The story of UIJC and its members for sure will not end here. Having been carried in the tummy of the Conservative Movement, delivered by the midwives of the Progressive Movement and being fed with milk and honey by some Orthodox Movement, the Jewish community will continue on its spiritual journey towards the perfection of their souls until the day they join their Jewish ancestors in the Olam Haba. 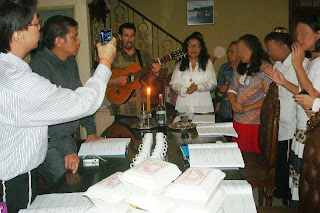 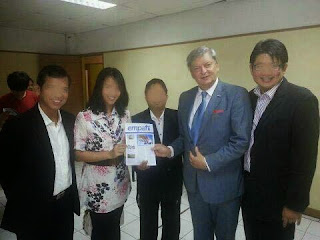 Meeting with President of Christian for Israel, Willem Glasshouwer from Holland